Bon's off Broadway is a very special restaurant at Broadway and Nanaimo in Vancouver. They have a $2.95 breakfast that does the trick when you're feeling bad from the night before. Most weekends I go there with a friend or two. I was really hungry today so I had three breakfasts. I'll miss places like this when I'm back in Whistler.

I'm not sure where I'd rather be. I would be so close to and in tune with the coming winter in Whistler, and life would be simple. I'm also probably more comfortable in the city. I might try to convince myself that I enjoy life more in the sticks but that's not true. I like all this concrete.

It's fall now, and it got cold surprisingly quick here in Vancouver. I actually got sick spending the first cold, rainy day of autumn outside. Now I've missed three days of work in bed. At least I caught up on Breaking Bad.

That and cleaning my room. Look at all my shoes. 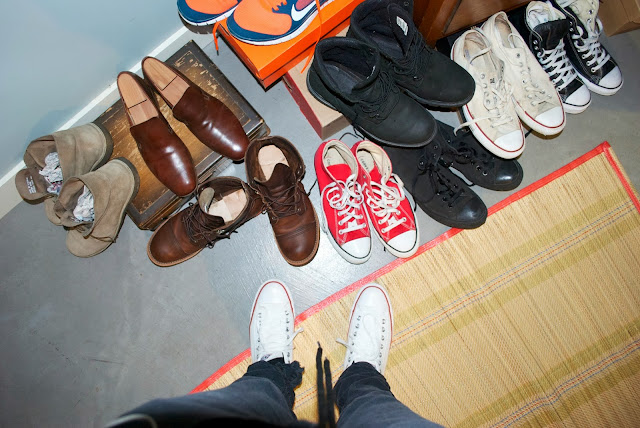 I don't really know how I feel right now about this season edit. Unlike completing most accomplishments this hasn't left me confident and certain about anything. But watch it. Some guy on Newschoolers said it was so ill. That's definitely something.

I spent 125 on the title graphic so it better not suck.

That's all I have to say about that.
Posted by Jacob at 9:53 PM No comments:

I got to ski through the park with the Romp guys one day last season. I had 3 cameras on me for two whole runs, it was crazy. I took this off of their facebook page. Here.

Just do it (I haven't yet but I will)

The plan was to start preparing for the ski season September 1st. I'm preparing money now (job), so  I might have enough to buy a snowmobile halfway through the ski season. Turns out my education fund might cover avalanche courses, good.


I could list the things I haven't done though. Actually I did list them, I just read them after and figured that that's something stupid and unoriginal to write about, especially in ski blog. But I do want to stress one idea that I've been thinking about in the last few days, and will be strongly exercising in the next two months. I will have to be really consistent regardless of personal negative feelings.

I'm meeting with a trainer today. All I've been doing is rollerblading for the last few weeks, which is really fun but it's not the equivalent of going to the gym and working on your personal bests. I'm not sure which activity helps my skiing more either. It's actually kind of conflicting.

If you have read this, please visit again as I'll be posting at least twice a week until....

COMING SOON
-My 2012-313 PROMOtional edit
-more shirtless photos
-Rollerblading
-I bought Nikes so expect athletic greatness
-nothing about my summer because it was boring
Posted by Jacob at 12:46 PM No comments: