Got a clip on my phone in horseshoes today in harmony.


Feeling super good right now. Conditions are tight and the hill is filled with dope people. Also I'm seeing some big hits that I've never considered before, just got to wait until my ankle is 100% to approach them. I'm getting my hands on some of the shots taken by Louise Christie at Whitewater. I will elaborate and throw up the shots another day when I've got some in higher res., soon.

In the meantime here's a little teaser shot. 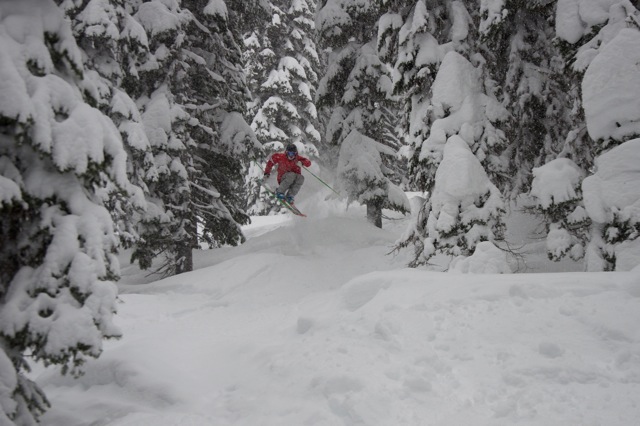 I'm getting tired of rushing to get these posts in between a day of skiing and going to work.
Posted by Jacob at 4:11 PM No comments:

I just returned to Whistler from a road trip with my dad to Nelson. My father wanted a break from work and we had an opportunity to stay with one of his old friends just outside of Nelson for the weekend. Our trip coincided with two things: a decent storm system, and the Kootenay Coldsmoke Powder Festival. The first day I spent criusing the mountain and trying to get my ankle working again after a fall last Saturday, it wasn't snowing a whole lot so I didn't mind the mellowness. Whitewater is an old school steep tree resort a lot like Red Mountain but with a much more consistent slope, and bootpack accessible ridges behind it, not to mention a bit more snowfall. It also has amazing food.
I didn't get to explore Nelson much, but I did enjoy the sight of the early 20th century buildings while passing through, not to mention the coffee. The second day we woke up to 30 cms of fresh Kootenay powder. My ankle felt strong and I got faceshots all morning, not to mention the opportunity to meet a few of the companies hanging out at the demo area. Later in the day I skied in the PowderKeg Slopestyle, a grassroots style event that had skiers and boarders competing against one another. The 15-18 category threw down huge tricks (1080's, double backflips) and despite landing very few, it was just good to watch. My first run was a total mess, with no landed tricks I was considering skipping the second heat and going skiing instead. I went against that partially just because the snow in the venue was so deep. My second run worked, I spun a true 3 off a sizable cliff, stomped it and got a couple waist deep turns in.
That day and the next we continued to even more snow. The awards were on Sunday and to my surprise I ended up on the podium. The Coldsmoke Festival is a great thing to be in Whitewater for. It's a really good example of how personal and friendly the ski industry is. I definitely want to come back next year. I'm back in Whis now, and it's really good- so is the forecast.

The photos I took on this trip were fairly impromptu, perhaps even contrived. I just didn't seem to have any time to set up a good shot. Whistler village leaves something to be desired for photos but I'd like to bring my SLR on the hill and get some action shots with a good crew. I'm more interested in taking some quality shots on my upcoming trip to Lake Louise (airport photos) as well as taking photos with my friends in Vancouver. The next time I come across some cash I'm going to pick up a portrait lens.

Also, expect some good shots I grabbed up in Whitewater up in the next few days. I will say no more.
Posted by Jacob at 5:30 PM No comments:

I feel that I've been experiencing lows since I got back from Red Mountain. Some where on my way back from Red I picked up a fun little disease called whooping cough which slowed down my early February. I pushed through it for a little while when the conditions were good, however I've taken the last week off skiing and now I feel considerably better. What would I do in my free time? I cleaned obsessively, listened to new hip-hop, wrote some hip-hop (the songs name will probably be "red socks"), read (Barneys Version), went through some agonizing work shifts, worked out (a little) and started a new TV series (Dexter). Now I'm back blogging, skiing, and I have some plans for the next couple weeks. I'm heading to Nelson for a weekend in the end of February with my father for some soul skiing and a Powder Slopestyle event (?). Seeing as Nelson is a beautiful town expect me to dust off my SLR and publish a photo essay on here, and perhaps meet some locals and get some shots on the hill as well. In the beginning March I'm set to go fly to the Smith Optics Freeskiing Challenge (why these long titles?) at Lake Louise which I feel very good about, I think I got the butterflies out at Red and and ready to enjoy myself and go kill it worry free.

I didn't miss skiing all that much when I was at home sick but after skiing the ice up top today I can say that my focus is certainly back and I'm looking forward to Saturday when It's supposed to snow again. I'm also looking back. Like hearkening to January when the snow was soft and the sun was up. My good friend Jon made an edit of his season so far, I am lucky to have the first two clips in it. I genuinely love this edit, the first shots match the pace of the song so well, it's not imposing, and the subtle text placement is right on point. My first line in it isn't bad either.

Inside My Head: Red Mt.

This year at the Canadian Open I went through several considerably different mindsets and I would like to share with you how they affected my skiing, and the trip as a whole. The First day I arrived was the inspection, I definitely wasn't on my game, and largely due to the skilled competition I was doubting my myself. Me and my buddy Jon skied around Red which helped cleared my mind, however the anxiety didn't quit until I fell asleep that night. I woke up for qualifiers with a very focused mentality and because of this my confidence went up as well. I knew I could ski my line and built up the intensity up top to accomplish something I was fairly proud of.

The second day was surely the hardest day of skiing I've gone through this season. I had cleared qualifying to 7th place, but the Semi Final and Final venue was on Mt. Roberts, terrain I had never skied or even really looked at before. This was my first time getting a snowmobile ride, wearing a beacon, and meeting a lot of the competition. I was encountering so many things I had never done before, all on a day that I had put an enormous amount of pressure on myself. Arriving at the top of the venue prompted memories of Lord of the Rings; jagged rocks, fog, ice, all sitting a top a razor sharp ridge. I figured out a line and spent several long hours inside the lodge, waiting for my run. There, I met a good man named Dylan who had coached for several years, he gave me some very good advice. Dylan said that the same energy that goes into fear and anxiety before a competition also is what makes us excited, or in skiers terms: stoked. Despite Dylan's good advice my fear got the best of me and I skied without focus and intensity, missing several lines, grabs, and at one point falling. I made it to the finals and knew I had to forgive myself and move on.

Though I can't say my mind was clear during finals, I knew I could handle the intimidating venue and had a line to ski my way,  so I popped in my headphones turned the Dr. Dre up and dropped.  This is now my go to mindset. I skied with confidence and style, and ended up in fourth. If I had a name for this psychological state it would be called -knowing you have it, and not giving a  fuck about the rest-. I was so caught up in fear that I forgot that just skiing it would ultimately yield better performance.

I'm still trying to gather photos and videos from Red, despite the seemingly abundant media coverage, I can't seem to find much on the internet.
Posted by Jacob at 7:26 PM No comments: