I like to scope lines by myself. If I'm in a group I get hyped about skiing well and trying new tricks because everyone else is, but the group situation rarely leads to weird little gullies and zones no one has been to. So on my lonesome the other day I got deep in the woods enough to find a pillow line I hadn't seen in years. I gave it a go the next day on camera but I straight lined off the side of it and the shot didn't work out. I hope I get a second chance at it.

This is a frame of me dropping in. It was a long way down if I slid off that first pillow. 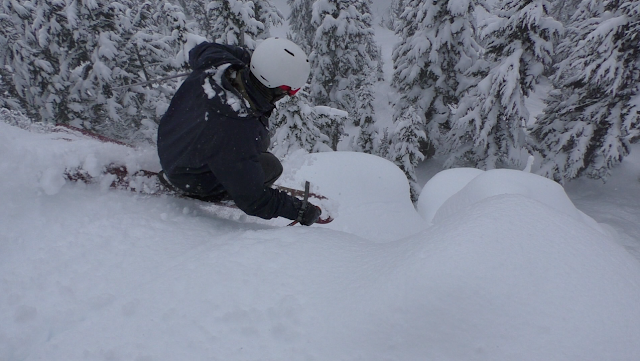 Today was so great. Waking up, I definitely wasn't feeling 100%. I hadn't gone to sleep until late and I was getting over a cold so my whole body ached. I showed up at the gondola at 7:30, a good 45 minutes before opening. After two deep laps lower on the mountain our group (the most core ski bums I know) went to peak chair to get first tracks in the alpine. Two and a half hours later, Peak chair cracked. A patroller had broken his leg triggering a slide and created a delay. This was a small inconvenience when thinking about what he was going through. We were on the third chair up, so when we approached the top nothing else mattered.

Our first descent was down the run the patroller had triggered the slide on. Nerves were high but after getting down to the tree line I had the deepest run of my life. The centre of each turn brought the snow up to my chest. If there were one feeling I wish I could recreate on demand, that might be it. After one deep run my mind switched back to the first thought I had waking up, which was to land a particular cliff.

My next run up peak was the beginning of a battle to land a drop called bomb tram. I've never not landed bomb tram and I've even landed a spin off of it. My first and second airs I went to fast and even though I landed centered I couldn't handle the compression and exploded into a tumble. After losing my shit and seeing stars after my second hit I briefly questioned my decision making. For whatever reason I went for a third, crept off the edge and cleaned it.

I let myself relax after that. I found a few fresh lines and puttered down home in the warm sun. I didn't get any shots or photos and no one may have seen me on my biggest line, but none of that matters because I landed the biggest cliff today and I'm the best skier on the mountain.

RIP Shane
Posted by Jacob at 9:16 PM No comments: