I'm pretty damn psyched on this one. I think it's my best yet. After all the time I've spent obsessively tinkering with it though, I have no perspective on how good it is anymore. I had a shoulder surgery August 2015 and started filming for 2016 season mid February with Jon Grierson on a Kootenay trip. This followed by two days filming for Intersection with Seth Gillis and then in April three days Filming in Brandywine zone with various buds. I snuck in two shots from the 2015 season (shhh) and boom, I had just enough for a 3 minute edit. So considering it's no more than a weeks worth of filming from a half season that I managed to also fit a few comps into, I'm satisfied.

I'm not going to lie, I'm not happy with the view count on the video so far. I've sent it out to eight blogs and no ones gotten back yet. It's been only a day, but damn. This kind of hurts. There's a lot of negative stuff I'd like to say. I want to shit all over other guys edits. There's a lot to be said for not giving a fuck about public opinion but I'm neck deep playing a game of it. So, if my video isn't good enough then I've got to try harder.

I'm seven seasons deep into the ski game and I don't consider myself successful. I often wonder what the hell came out of the last six years. I have had a few tangible high points, but feel anxiety in that I could be doing a lot of other things. All it takes is a good run to turn that perspective around. To realize that I've skied 8-900+ days in those six years and that regardless of whether I've "made it", I can hold my own on skis. Like every season, the setup for this one looks better than the last. It's a slow progression, but I haven't had a year in Whistler in which my situation didn't improve. Each year, something good enough happened that I kept going.

I've met some really great people throughout these years and I want to clarify that I have no doubts about the folks I've met along the way. S/O to human beings.

So, it's a battle. I've got to let the self loathing, perfectionist hate drive me (see - Jon Olsson) to go get shots but also be present and enjoy skiing to keep happy.

Without further ado here is my season edit reflecting times past and my trick list prefacing times to come.

Song - Iron Maiden - Fear of the Dark - A compilation of my favourite shots from the last season. My approach to editing is heavily influenced by skate videos. I used (almost) no slow motion or filler and no go pro footage. No Bullshit. Big thanks to everyone who filmed and helped me dig my sled out. Thanks to Iron Maiden for your music not only in the context of this edit, but also for giving me focus on skis all winter. Thanks to TMC, Lange and Faction for keeping me rolling. Thanks to Mom and Dad and K for unwavering support. See you on the hill.
insta: @jacob_boyd
http://underwhiteskies.ca 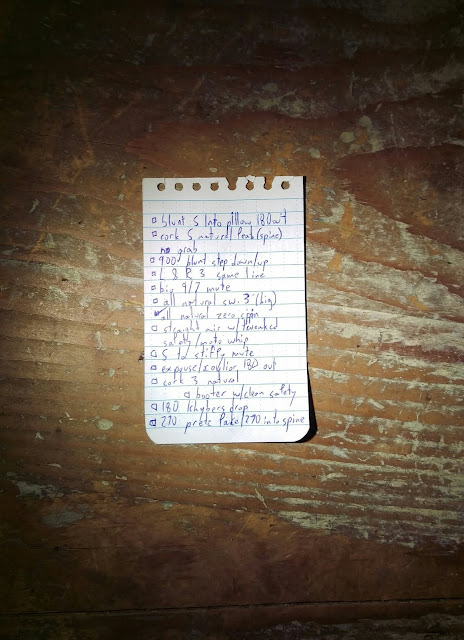